Kenya 7s  ended their long wait for a place in the World 7s Series Cup quarter-finals as they beat Scotland 20-10 to reach the Los Angeles 7s’ last eight in matches being played at Dignity Park.

It is Shujaa’s first quarterfinal since the Dubai 7s held in 2021 December in Dubai.

Both sides came to this knowing that a win would see them qualify for the quarterfinal.  Kenya had lost the opener against Samoa and bounced back thanks to a win over England while Scotland had defeated  England in the opener and lost to Samoa in the second match. 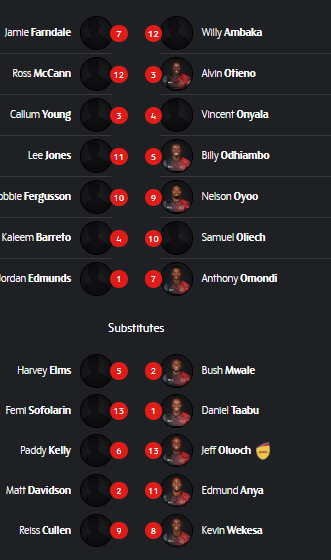 The Scotts started off impressively and quickly scored through Kaleem Barreto for an unconverted try.

Kenya responded in a similar fashion with Billy Odhiambo having a big carry before releasing the ball to supporting Anthony Omondi who was tackled before he crossed over. Omondi set up skipper Nelson Oyoo for the equalizer.

Scotland landed a penalty in Kenya 7s 22 and worked their way out to score through  Robbie Fergusson.

Kenya once again tied the scores when Sammy Oliech danced past his markers and passed the ball to unmarked Alvin Otieno who went over for an unconverted try that tied the scores at 10-10 at halftime.

In the final half, Kenya 7s added the third try after Vincent Onyala sold a dummy off a ruck and slipped past the defence for a try.

Onyala would once play a key role in the final try as he collected a loose pass and the ball was shifted to space before it got to Odhiambo who accelerated for the fourth try for Shujaa.

Ambaka had a try-saving tackle with 23 seconds to play and this locked Scotland out of the game.

Kenya will be back in action on Sunday evening East African Time.

Meanwhile, South Africa dropped out of the HSBC LA Sevens title race on Saturday after losing two of their three pool B matches and in the process lost their grip on the overall HSBC World Rugby Sevens Series as well.

The Springbok Sevens started their defence of the HSBC LA Sevens on a disappointing note when they were outplayed 21-7 by the USA in their opening pool B clash at Dignity Health Sports Park in Los Angeles on Saturday, before they bounced back with a 22-17 win over Canada. A 17-14 defeat to New Zealand demoted the defending LA and World Series title holders to also-rans in 2022.

South Africa, who had to beat New Zealand by 12 points to get into the Cup quarters, did not start well in that match either. They conceded three tries in the first half to trail 17-0 before they finally showed some grit and grunt, scoring through James Murphy and Shilton van Wyk, but the two converted tries were not enough to overhaul their opponents in black.