Billy Odhiambo scored his 100th try for Kenya 7s as they defeated England 19-14 to keep their quarterfinal hopes alive in the Los Angeles 7s played at Dignity Park.

Damian McGrath’s charges had suffered a 33-14 loss to Samoa in the opening match and needed to pick a win to revive their quarterfinal hopes. 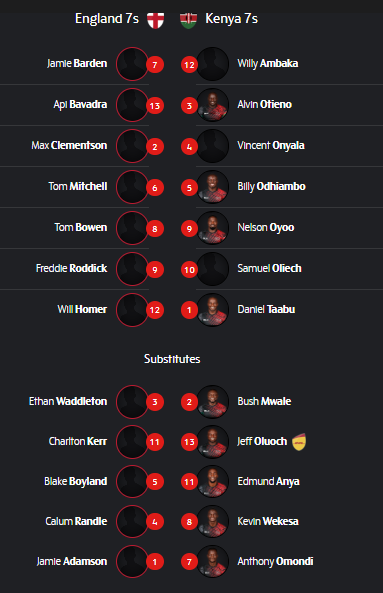 Seeking to end their bad run in the competition, Kenya enjoyed possession in the opening minutes before they won a penalty in England’s zone.

Daniel Taabu quickly tapped the ball and delivered a short ball to charging Willy Ambaka who hit the gap with pace and went over for a try. Sammy Oliech converted for a 7-0 lead.

England were let down by indiscipline and conceded several penalties after having lost Tom Mitchell to a yellow card.

A quick tap from a penalty by Taabu saw him set up Billy Odhiambo who raced to score the second try for Kenya. The try saw the centre move 100 tries for Shujaa in the World 7s Series.

The try sees him join Collins Injera (279 tries), Humphrey Kayange( 159 tries), and Ambaka (131 Tries) on the list of Kenyan players that have scored over 100 tries.

In the final half,  Odhiambo set up Ambaka for his second try of the day to take the scores to 19-0.

Kevin Wekesa was yellow carded just after coming on following a tackle without the ball and England were awarded a penalty try.

England grabbed a late try to move to 14 points but it was too late for them. Kenya will play Scotland at 2:31 AM in as they seek to book a place in the quarters.