Kenya 7s started off their Los Angeles 7s campaign with a 33-14 loss to Samoa in a match played at Dignity Park on Saturday.

Shujaa headed to this tournament having had a bad run in the last three tournaments picking just a point in each outing.  The team now under coach Damian McGrath were hoping to end the season on a high. 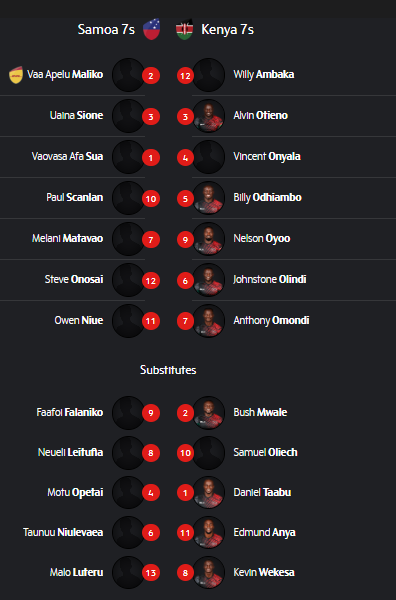 They however started off on a wrong footing conceding three tries in the opening half. Vaa Apelu Maliko beat his markers to score the opening try in the fourth minute and the try was converted for a 7-0.

Maliko then sliced through the defence two minutes later stretching the lead to 14-0 after another conversion by Melani Matavao.

Uaina Sione scored in the dying minutes of the half for a 19-0 lead at halftime.

On return from the break, Daniel Taabu’s darting run saw him sell a dummy before splitting through the defence for a converted try.

Kenya trimmed the gap with Taabu gaining metres before he released the ball which was moved to find Willy Ambaka and he battled his way through for a try that cut the gap.

Sammy Oliech belted in a conversion from a tight angle to keep Kenya in the game.

Shujaa defence however failed to contain Samoa’s defence as they immediately hit back with a converted try that saw them lead 26-14.

Taunuu Niulevaea sealed their victory with a converted try and the side would pick a 33-14 victory. Kenya will be back in action at 11:10 East African Time.

Jordan Edmunds bagged a brace while Callum Young added one try in England’s 19-5 loss to Scotland.

USA are here to play 😤🇺🇸