Springbok coach Jacques Nienaber made three changes to his starting team that ran out for their final Test against Wales for their opening Castle Lager Rugby Championship fixture against New Zealand in Nelspruit on Saturday, where Malcolm Marx will earn his 50th Test cap.

Marx will run out at hooker in place of Bongi Mbonambi, while Faf de Klerk comes in at scrumhalf in a rotational switch with Jaden Hendrikse. The only injury-enforced change is on the right wing, where Kurt-Lee Arendse will earn his second Test cap in place of Cheslin Kolbe, who is recovering from a broken jaw.

Both Mbonambi and Hendrikse will play off the replacements bench, where the only other change is the inclusion of Salmaan Moerat (lock) in the place of Elrigh Louw (loose forward).

Action between All Blacks and Springbok. Photo Courtesy/SA Rugby

“One of the changes to the starting team were injury-enforced with Kurt-Lee coming in for Cheslin, and with Malcolm, we feel it is a big occasion to play one’s 50th Test so it will be good for him to start, while we believe Faf’s experience and style of play will complement our game against the All Blacks,” said Nienaber.

“These changes resulted in direct swaps to the bench for Bongi and Jaden, and with Salmaan covering lock we can either use Franco (Mostert) at lock or flanker, and we have Kwagga (Smith) who can also provide cover in the loose trio and even on the wing if needs be.”

Nienaber added: “We played two Tests with a similar team in the Castle Lager Incoming Series, and we feel this is the right squad for this specific challenge against New Zealand.

“The All Blacks are strong all around and they will come to Nelspruit desperate to avenge their series defeat against Ireland and to prove that they remain one of the powerhouses in world rugby, so we believe experience and physicality will be vital in this Test.”

Nienaber spoke highly of Marx as he faces the important career milestone of 50 Test caps: “We are very proud of Malcolm’s achievement, and we wish him all the best for the game. He is a true warrior, and he epitomises what we stand for as the Springboks.

“But as we said with the recent milestones of Eben (Etzebeth) and Bongi (Mbonambi), we are preparing for a challenging Test which will be vital in setting the tone for our Castle Lager Rugby Championship campaign this year and that is our focus.

“The occasion will be so much more special for Malcolm if we win the Test, and the entire team need to do their best so that he can look back at this occasion with good memories.” 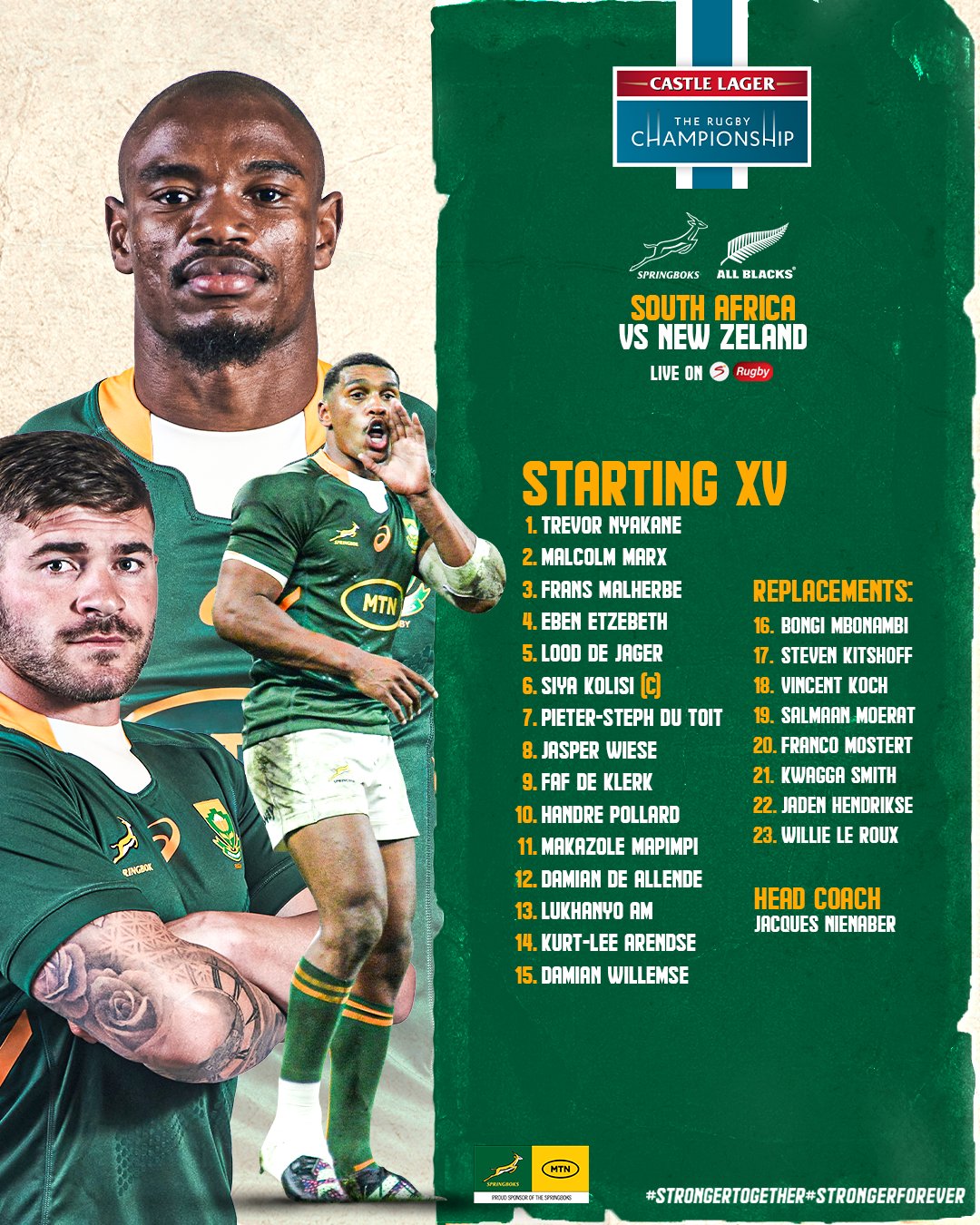