The Victoria Cup match between Uganda Cranes and Zimbabwe Goshawks has been postponed, the two Union have announced.

According to statements released by the Zimbabwe Rugby Union and Uganda Rugby Union, the match has been postponed due to circumstances beyond their control.

“The Zimbabwe rugby union regrets to inform the nation that the victoria cup game against the Uganda Cranes scheduled for the 30th of July 2022 at the Kyadondo stadium in Kampala,  Uganda has been postponed to a later date due to unavoidable circumstances,” ZRU announced.

The two Unions, however, insist they are determined to have the match played on a later date. 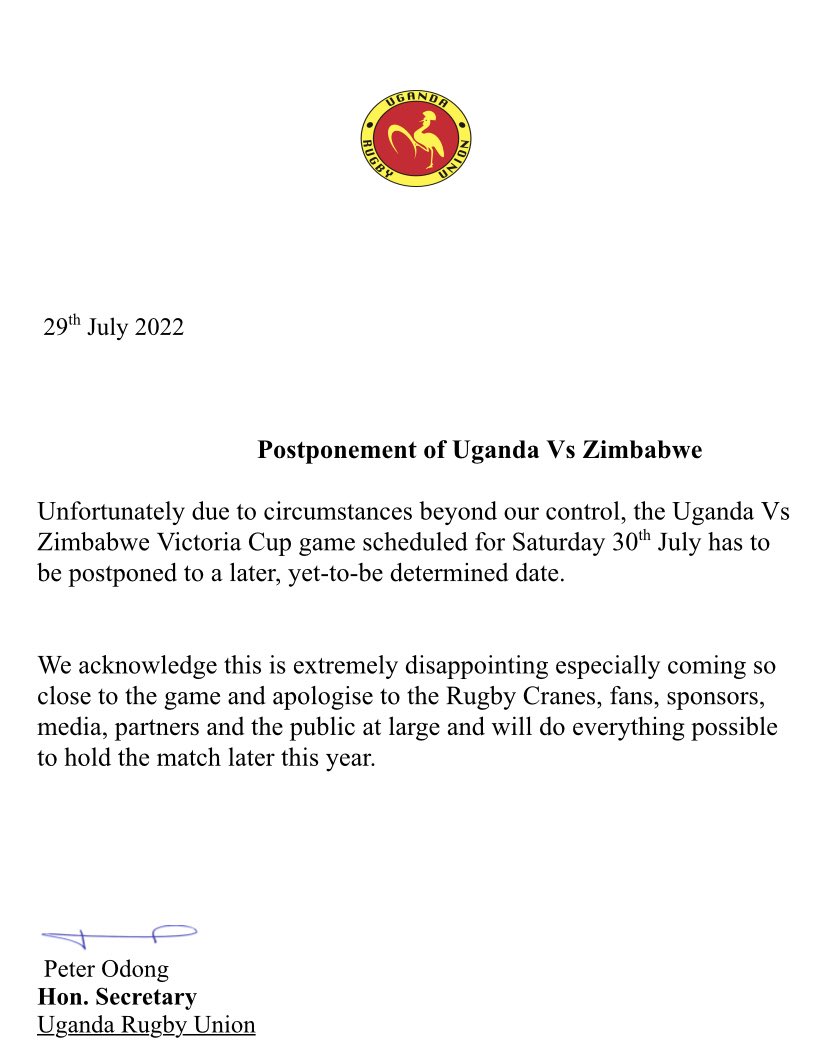 The two sides last met during the 2019 Victoria Cup with Zimbabwe beating the Rugby Cranes home and away. The Sables won 31-26 at Legends Club and later completed a double over the Ugandan charges in Harare with a 32-26 victory.

Both teams were part of the World cup qualifier in France where Zimbabwe finished fourth while Uganda emerged fifth after a false start to the campaign.

Uganda Rugby Cranes were eager to make amendments when they host Zimbabwe Goshawks in Kampala after having run a disappointing campaign in France.

The return leg of the Victoria Cup hasn’t been confirmed yet but it will possibly happen as both Uganda and Zimbabwe want to keep their XVs sides engaged.

Meanwhile, given the last-minute cancellation of the Elgon Cup fixture with the Kenya Rugby Union citing financial constraints, revisiting the Victoria Cup is quite a plausible opportunity that perhaps both Unions should work to ensure it becomes an annual encounter.

Chebarbar 7s: All you kneed to know about 2022 edition
Kenya 7s hit Uganda in Commonwealth Games opener
To Top
error: Content is protected !!