Wallabies coach Dave Rennie has made six changes to the starting XV ahead of Saturday afternoon’s clash with South Africa at the iconic Adelaide Oval, in what will be the first Test to be played in the South Australian capital since 2004.

The two sides will square off for the Mandela Challenge Plate, with the Test also featuring as part of a double header with the Wallaroos taking on the Black Ferns in the earlier game.

57-Test capped Reece Hodge returns to the starting line-up at fullback with Tom Wright shifting back to the right wing and Marika Koroibete on the familiar left edge for the match which forms part of the eToro Rugby Championship.

After returning to Australia early from Argentina for a family bereavement, Allan Alaalatoa will start in the front row at tighthead prop alongside hooker Folau Fainga’a and club teammate James Slipper who plays his 120th Test. Slipper will also continue to captain the side this weekend.

Rebels stalwart Matt Philip’s experience has been called upon, named in the run-on second row pairing alongside Rory Arnold who made his first appearance in the gold jersey this year, in the side’s last outing in San Juan.

The backrow remains unchanged for the third consecutive week with Jed Holloway continuing his impressive start to his Test career at blindside flanker. He’ll combine with Fraser McReight who is selected at openside flanker and Rob Valetini who will wear the number eight jersey for the 16th consecutive Test.

The experienced Nic White will again be the starting scrumhalf, partnering Brumbies teammate Noah Lolesio who will play his first Test against the Springboks on Saturday afternoon.

Queensland inside centre Hunter Paisami is another who returns to the starting team, reigniting his midfield combination with the fleet-footed Len Ikitau who will wear the number 13 jersey.

Rennie has opted for a 6-2 split, with Waratahs hooker David Porecki also recalled after overcoming injury to be named as the finishing rake, with the experienced duo of Scott Sio and Taniela Tupou the other replacement front rowers.

Darcy Swain will be called upon as the lock cover, with Melbourne-born duo Rob Leota and Pete Samu the other forward replacements.

Reds skipper Tate McDermott will be asked to bring energy as the finishing scrumhalf while Andrew Kellaway has recovered from injury to round out the match day 23, in what will be his first Test since the Wallabies defeated England in Perth in July.

Wallabies coach Dave Rennie said: “It’s great to have a number of experienced players back in the mix this weekend.”

“We understand that respect is earned daily and we get an opportunity to earn it against the current World Champions on Saturday afternoon.

“It’s really motivating to be back at home in front of our supporters, especially in Adelaide, a place we haven’t played at in 18 years.” 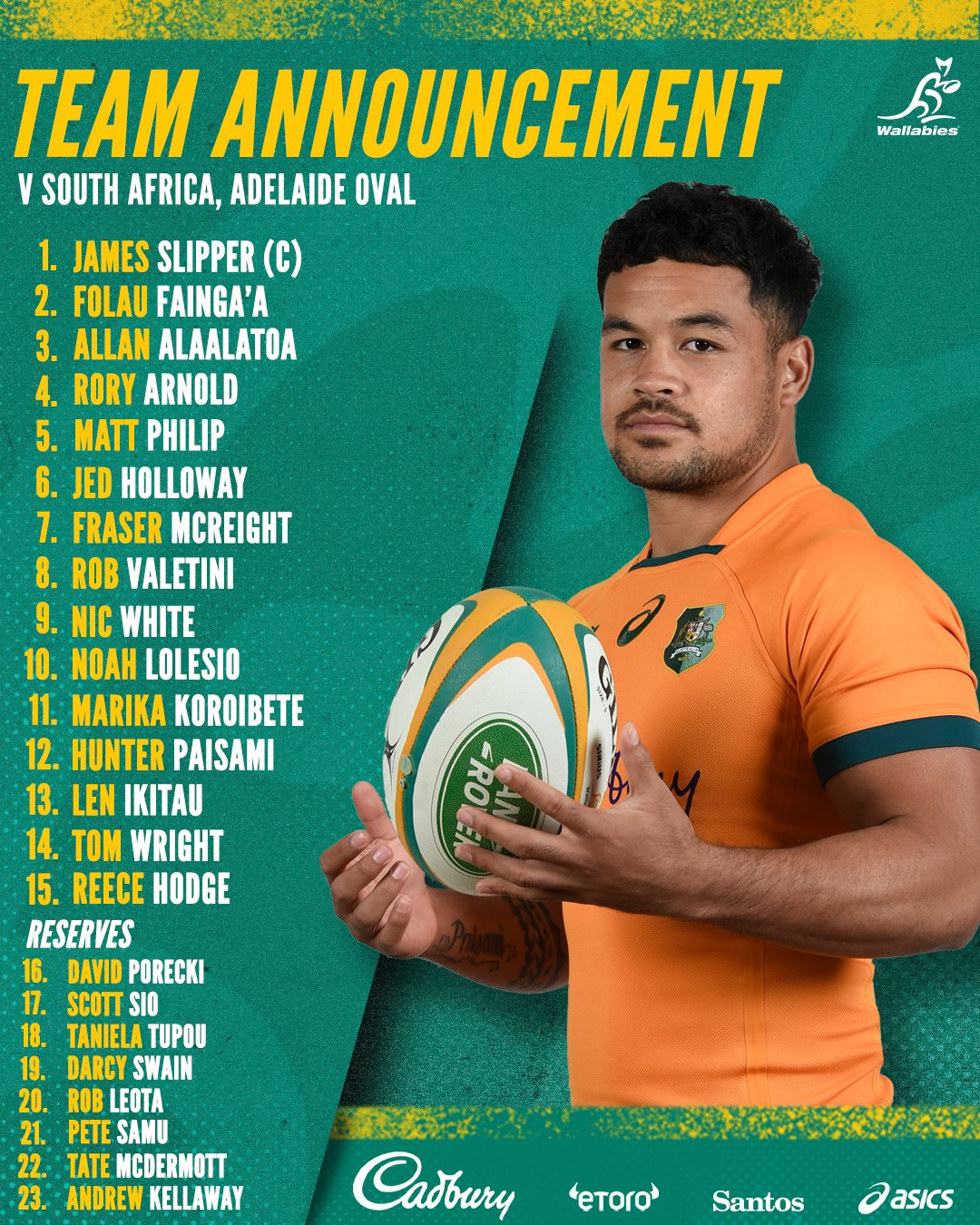 All Blacks squad for Rugby Championship date against Argentina
Wallabies beat Springboks in Adelaide
To Top
error: Content is protected !!