TOWNSVILLE, AUSTRALIA - SEPTEMBER 25: Luke Jacobson of the All Blacks is tackled during the Rugby Championship match between the New Zealand All Blacks and the South African Springboks at QCB Stadium on September 25, 2021 in Townsville, Australia. (Photo by Matt Roberts/Getty Images)
Share
Tweet
Share
Share
Email
Comments

Springbok coach Jacques Nienaber made five changes to his starting lineup – two of which were injury-enforced – for their second Castle Lager Rugby Championship clash against New Zealand in Johannesburg on Saturday, where Frans Malherbe (prop) will mark the significant career milestone of running out in his 50th Test for South Africa.

The three rotational switches made by Nienaber see bruising No 8 Duane Vermeulen return to the Springbok squad after recovering from surgery to his knee, where he takes over from Jasper Wiese, while Bongi Mbonambi slots back in at hooker after Malcolm Marx earned a start last week to celebrate his 50th Test cap, and Ox Nche takes over from Trevor Nyakane at loosehead prop.

The two changes in the backline see Jaden Hendrikse coming in at scrumhalf for Faf de Klerk, who has been placed on a return to play protocol after suffering a concussion in the team’s 26-10 victory against New Zealand last week, while Jesse Kriel will start on the right wing in place of Kurt-Lee Arendse, who also suffered a concussion and has been released from the squad after being handed a four-week suspension for a dangerous tackle in the match.

While Mbonambi and Marx switch roles between the starting team and replacements bench, Vermeulen’s inclusion sees Wiese take the role of an impact player in place of lock Salmaan Moerat, while Herschel Jantjies fills the void left by Hendrikse’s promotion to the starting team.

“Jesse has played over 50 Tests, and he has been waiting in the wings for his chance. He’s played wing for us before, so we know what he can bring to the game, and we are also excited to welcome back Herschel, who has played an immense role to help prepare the playing squad for the last two Tests.”

Nienaber lauded Malherbe for his achievement of reaching a half century of caps and said: “We are very proud of Frans, and it is up to the team to make it a memorable occasion for him by giving their all to register a victory.

“Frans’ work ethic is fantastic and although he is quiet off the field, he certainly makes his presence felt on the field.”

Nienaber expected a massive onslaught from New Zealand on Saturday despite the All Blacks suffering their second biggest defeat yet against the Springboks last week (16 points – one less than their biggest ever defeat of 17 points).

“New Zealand are similar to the Springboks in the sense that they do not give up,” said Nienaber.

“They fought until the end against us at the Mbombela Stadium last week and we expect nothing less from them on Saturday. 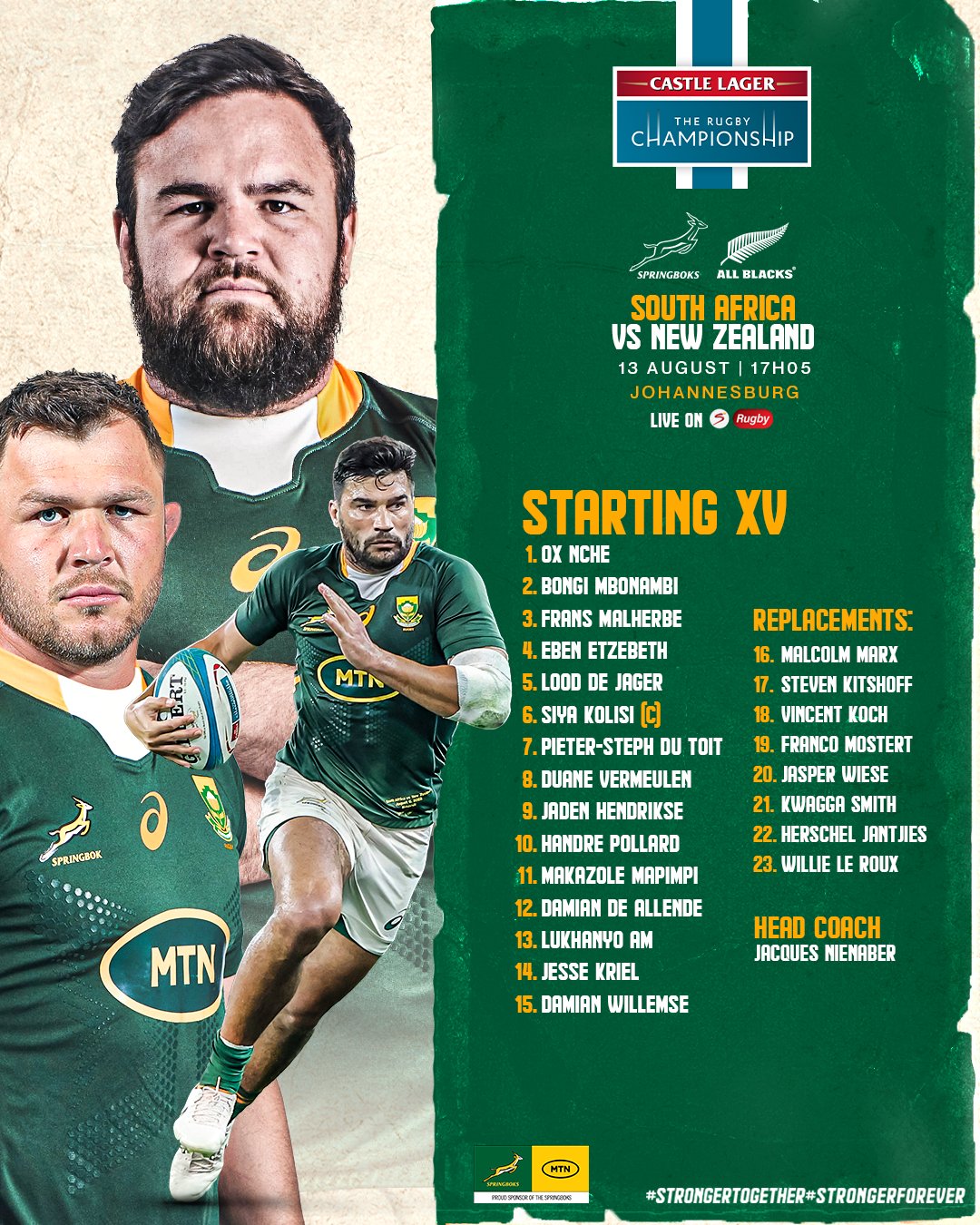