About 20 days ago, Oscar Dennis announced his retirement from rugby just at the age of 27.  His announcement was followed by love and sympathy from his rugby teammates and fans, especially on social media channels.

His decision to hang boots came 21 months after a nasty accident that left his leg badly damaged. The Scrummage Africa chatted with the now-former rugby player, who has changed his focus to business, and he spoke up about his rugby adventure, the injury he suffered, and the healing process.

Unbeknownst to many, Oscar’s athletic roots may be traced back to Banda School in Kenya. Oscar claims that he did not start off by playing rugby. The fly-half excelled in a multitude of sports, including hockey, cricket, swimming, and athletics. Surprisingly, he adored all sports!

“I grew up in Kenya at Banda School, doing all sports and liking them all. This continued into my high school years, I continued to play hockey, rugby, cricket, swimming, athletics, and other sports rather than focusing on one.  When I finished school and moved to Australia I narrowed my focus,” he stated.

During his time overseas on several stints, he got opportunities to play for Bath Youth Rugby in the United Kingdom and the University of Queensland in Australia. He also got chances to play in Russia and Chicago before getting a scholarship to play for the Bond University 15s team in the Queensland premier competition. 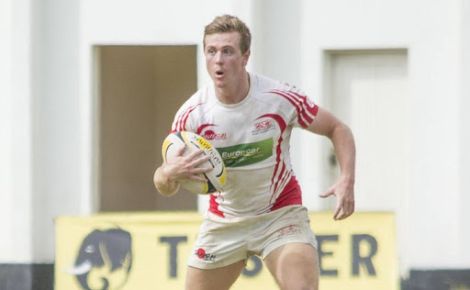 He believes that playing for various teams in different parts of the world helped him grasp patterns and understand different players.

“Having played rugby in different countries, the experience was amazing and taught me to understand the different patterns of rugby played in different parts of the hemisphere,” he stated.

After his return from Australia, he received a phone call from one of his friends, James Evans, who was then playing for Nondies RFC, inviting him to join the record Kenyan Champions. He got interested and joined Nondies. Following that, he represented the squad in the local National Sevens Circuit before getting called up to the national team.

“I ended up at Nondies on my return from Australia and a friend of mine, James Evans, who was playing for them (Nondies) called, telling me to come around and have a run.”

Oscar made his Shujaa debut during the 2014 Safari Sevens. His call up to the camp came while he playing golf. He was privileged to share a room with former Kenya 7s skipper Andrew Amonde.

“My first camp for the national team was for Safari Sevens in 2014 when I was playing golf and got a call from Paul Treu asking if I could make it for training that evening and to meet at Sarova Panafric.”

“However, when I turned up, I was told that I would be sharing a room with Andrew Amonde and that I would be playing for Kenya during Safari Sevens. I had arrived with no other clothes but my training gear for the evening. So after training, I went home and broke the news to my family and packed a bag for the week.”

Oscar describes his first appearance for Kenya Sevens as “a dream come true and he couldn’t quite believe it!” After his debut, he went on to win the 2019 Rugby Africa Men’s 7s title.  He also had his World 7s Series debut in March 2019 under Paul Murunga.

Oscar opens up on accident

Oscar’s celebrated career and dazzling displays on the pitch would come to a screeching halt on one terrific evening. He had just returned to Kenya from Bermuda, where he helped SX10 win the World 10s Series. After dinner with a friend and his mother, he rode away on his bike at 9 p.m., only to be hit by an overtaking car minutes later.

“I had just returned from Bermuda after winning the Rugby 10’s competition and was having dinner with a friend and his mother. I then departed on my motorbike at around 9 p.m., and as I turned onto the quarry lane, a car was overtaking from behind. As I went right, it came and crushed my leg.  I also went over the roof of the car and I recall waking up on the side of the road, winded and unconscious, I later understood it was a hit and run.” Oscar told Scrummage Africa.

The star described the journey to recovery as “an extremely long and hard one”.

He got his first surgery at Kenya’s Aga Khan Hospital. He was then airlifted to Cape Town, South Africa, where he was fortunate to dodge two amputation surgeries.

Oscar was hospitalized for six weeks and had seven surgeries during that period. He required skin grafts and an external fixator, all of his toes and feet were pinned. He had five more surgeries in nine months after that.

“It has been an extremely long and hard journey to recovery. I had the first surgery that night in Kenya at Aga Khan and then I was medically evacuated from Kenya down to South Africa where I went into the theatre for amputation twice, luckily the flesh was alive so they kept trying to save it.”

“I was in the hospital for six weeks and I had seven surgeries in those six weeks including pins in all my toes and feet, three skin grafts, an external fixator along with multiple other things. After that, I proceeded to have five more surgeries in nine months.”

The former playmaker says his entire family was there for him throughout the healing process, and he mentions Blitzboks star James Murphy as one of those who walked with him through the painful path.

“My whole family were very supportive throughout the whole journey and my sister flew down to South Africa with me. My whole family came down to SA and James Murphy’s family hosted us for a year. James Murphy is my very good friend who plays for the Springbok sevens and who I am now in business with selling and importing vinyl flooring in Kenya.”

“My girlfriend Maddy was also of massive help for me in these times.  Had to deal with all of my ups and downs and I’m glad she is still with me! And obviously all the support I had from fitness and the rugby family around the world on social media who sent so many messages of love and support.”

Though he wishes he could have played more for the National Team, he believes everything occurs for a reason.

“Of course, I wish I could have played for the national team more, however, I am a believer that things happen for a reason and I guess there was another path in life for me so let’s see what happens,” he revealed.

According to Oscar his best moments in rugby include; “ Getting his first call up into the national team, making his debut in Hong Kong against Fiji, being with all his brothers every day during training, winning the Bermuda 10’s during Covid, and qualifying for the Tokyo Olympic Games.”

What next after retiring

After rugby Oscar says “He has no idea what the future holds” but he has established Elements Custom Flooring in Kenya, which specializes in importing luxury vinyl flooring. He would, however, like to return to rugby one day in a coaching capacity.

That’s a good question and I have no idea what the future holds! It is definitely time to make some money as rugby in Kenya does not pay well. So as I said earlier, I have set up a company in Kenya called Elements Custom Flooring and we import luxury vinyl flooring that differs from the laminate one found in Kenya. I would love to get back into rugby one day so coaching may well be an option further down the line,” he concluded.