Kenya 7s settled for the second spot in the Commonwealth Games Pool D after a narrow 7-5 loss to Australia in the pool decider played on Saturday at Coventry Stadium.

Shujaa had picked back-to-back wins which meant only Australia could overtake them.  They however needed to win the pool to avoid a tough quarterfinal challenge.

Their opponents Australia had been held to a 12-12 draw by Uganda and came to this match hoping to win to book a place in the quarters as well as to win the pool. Though Australia had to play close to four minutes with one man less, Shujaa only managed one try against them and conceded in the final half and their winning streak in the event came to an end. 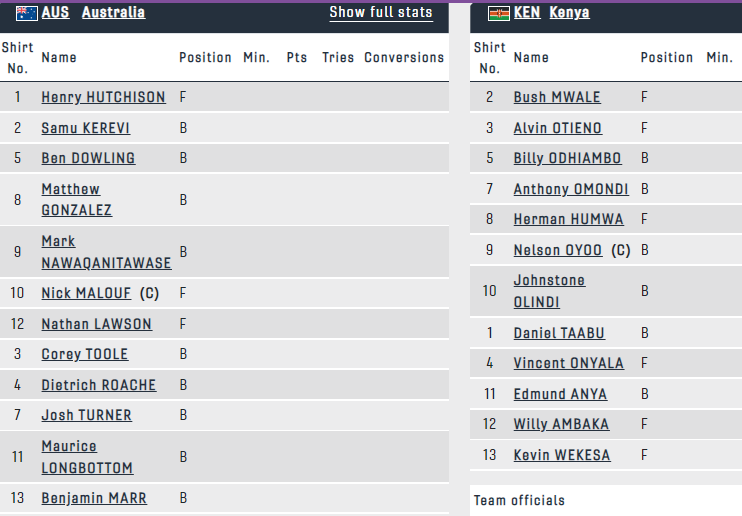 Shujaa got an early advantage when Nathan Lawson was yellow-carded in the first minutes of the game following a dangerous tackle on Bush Mwale.

Kenya made the one-man advantage count when Alvin Otieno spotted a gap on the left side of a ruck and raced to dive over.

The conversion attempt by Antony Omondi was off target.  Kenya held on to the slim lead heading to the break.

Australia were reduced to six once again in the second half  but fought on. They levelled the matters when Corey Toole scored a try that was converted for a 7-5 lead. Australia held on to the slim advantage to win the match.

Australia have topped Pool D with eight points while Kenya are second with seven points. Kenya 7s now shift focus to the quarters set to kick off from 10:26 East African Time.

Uganda picked the first win in the tournament as they beat Jamaica in the final  Pool stage match. Tolbert Onyango’s charges scored three first-half tries and added three more in the final half.

Philip Wokorach bagged a one and added five conversions in the win.  Aaron Ofoywroth scored two tries as Ian Munyani, Adrian Kasito and William Nkore picked a try each in the victory.